This dish has been a staple on Sean’s menu since he opened in 1993, and continues to be one of the most popular dishes… a simple dish; great produce being the most important thing!

From the garden: rocket, lemon, chillies, garlic
Recipe source: adapted from the recipe by Sean Moran at Sean’s Panaroma in ‘Let It Simmer’
Serves: 6 at home or 24 tastes 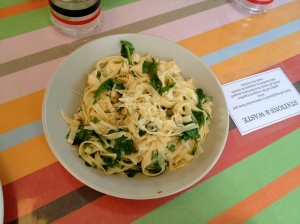 Notes: What is rocket also known as? What does to shred mean? What does al dente mean?