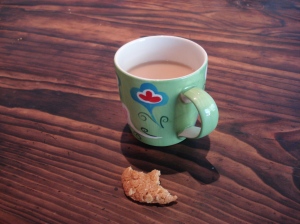 It’s a beautiful sunny day out there but there’s a frrrrreezing cold wind… Steve has sneaked away for forty winks and Olly has finally gone down too. Ava not so! She’s bouncing off the walls after allowing me to while away some time on the laptop. Now she wants action! How to amuse her quietly and let the others have their siestas? Let’s bake biscuits!

Whilst it’s not Anzac Day here (not even close – 25th April?) I never need an excuse to make Anzac biscuits. And un-Australian as it may be – apologies to those purists out there – we add some orange zest. Because we’ve some fantastic oranges in the fruit bowl and we feel like it.

Ava is funny, she keeps bending down to hide her head under the table: she’s sneaking bits of raw oat & flour mixture and doesn’t want me to see… I tell her that the more she leaves now, the more biscuits we get to eat later but I think she likes the game of subterfuge… She loves rolling the little spheres of goo in her hands and asks me every time if the ball’s the right size. She lines them up neatly to one side of the baking tray, all rubbing together, and doesn’t really understand that they’ll all spread. They’re all different sizes, but I tell her that’s ok: some will be chewy and some crispy, but all will be delicious!

The smell of the orange zest wafts out of the oven mingling with the toasty biscuit/ Golden Syrup yumminess, mmmmm.

Best thing about these bikkies? They only take 15 minutes or so to cook! Just enough time to clean up and pop the kettle on. 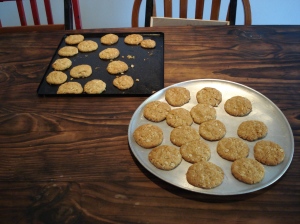 1 cup raw sugar (or white, or half brown, half white)

Combine oats, sifted flour, sugar and coconut in a large bowl. In a small saucepan, melt the butter and golden syrup over a gently heat. Mix the bicarb soda with boiling water, add to melted butter mixture and add this to the dry ingredients. Finely zest the orange and add the zest to the mixture. Stir until combined.

Take a teaspoonful of mixture at a time and roll into small balls. Place these on a lightly greased oven tray and allow room to spread. Cook for about 15 -20 mins, until lovely and golden. Allow to cool on the trays and then eat!

Makes about 30. Try not to eat all in one setting like we did. 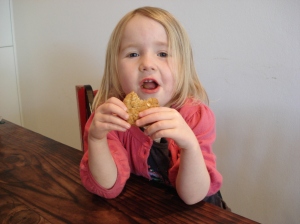 Little cakes for our friends the fairies (and gnome)

What to do on a long weekend where there’s nothing but rain, rain, rain? My thoughts turn, as always, to food! With Ollsy asleep, we gave daddy a well-earned nap on the sofa watching sport on the telly & apron’d up in the kitchen for a little fairy cake escapade…

Method
Pre-heat oven to 180°C
Cream the butter and sugar until soft and light
Add the eggs a little at a time
Sift the flour and gently fold into the mixture
Fold in the sultanas
Place 24 paper baking cases into mini muffin trays & spoon in  the mixture
Bake for 12-15 minutes,  until well risen and golden brown
Eat in garden with fairies
Makes 24

A perfect public holiday Monday afternoon: Steve & Olly woke to a house of yummy cake smells & Ava got to do some important mixing & spooning, licking the bowl and even to do some washing up –  me, I bit my lip and ignored the floods of soapy water cascading onto the kitchen floor…

Such delicious little morsels! They almost made up for the lost playground opportunities over the three days with the early spring downpours – a great thing for the garden as all the green stuff has EXPLODED! I’ve got some lovely photos for my next post –  in the meantime, as they say: the proof is in the pudding, hmm-mm! 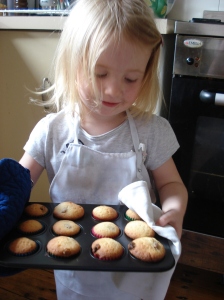 So, with that the weekend was over and it was time to think about finishing our little holiday – back to work, school and the week ahead with all its stresses and worries. Well, maybe after just one more tasty little morsel? And still enough cakes left to hide one in the garden for our little friends…

…and one last thing!

Congratulations to the fearsome Magpies, winners of this year’s AFL Grand Final 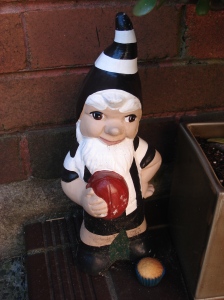 Have the cats got Olly’s tongue?

Our little Ollsy turns 18 months tomorrow, already… how amazing that the times flies so quickly! It seems that the hours are excruciatingly long but the weeks fly by: I’m very conscious of trying not to wish this time away as I realise how precious it is but I think it’s automatic conditioning to want to get to the next stage with your babies, whether it be solid food, walking, potty training or talking…

Talking of talking, or not talking as the case may be – I’ve been so enjoying Olly’s silence up til now that I haven’t even thought about his ‘next stage’… Ava, bless her darling heart, is a whirlwind of noise and motion and the two days a week she is at school have been our little oasis in a desert of maelstrom. It’s only in the last week I’ve thought about Olly talking and realised that he really should have been saying a few words by now, especially as his little buddy William has been galloping ahead in the verbal stakes!

So off we went to the audiology clinic at the Children’s Hospital and we had a fun half hour testing Olly’s aural reflexes, to be told his hearing is within the normal range and perhaps he has fluid behind the eardrums and to check it out with the doctor. Or perhaps our wee man is just a tiny bit lazy?! Why bother making the effort for all those separate words when a “uhh?!” will do for absolutely everything?

Let’s see what the next month brings – walking didn’t happen until he was almost 16 months, and at the moment he probably doesn’t feel the need to compete with the cacophony: Ava, the radio, the iPod, me shouting etc. Maybe this weekend we’ll turn it all off and see what happens…

Yum yum, spring has sprung and we’ve taken full advantage of the delicious seasonal goodies of blood oranges & broad beans: we splashed out on a bottle of Campari to have with freshly squeezed blood orange juice at our regular long Sunday lunch with the delicious Kerry & Rod last week & followed drinks with broad bean & pecorino bruschetta and Spanish jamon…

Campari used to be my drink of choice a few moons ago, when I lived and drank in Melbourne as a young single thing – and when I had the energy to demand the proper measure (45mls) of the various bars if poured incorrectly – and drinking it the other day after ten years’ absence brought back many late night Negroni memories. Aaah, misspent youth!

Also, I found a lovely recipe for broad beans from Stephanie Alexander, so I set up my able sous chef Ava to podding:

We steamed the beans for 3 minutes, then re-podded to get the smaller, softer beans inside and smashed them straight away with the mortar & pestle. Then added a little salt & pepper, some grated pecorino and a glug of olive oil, stirred again and then served in a bowl to spread on yummy BBQ’d Brasserie Bread’s quinoa & soy sourdough, with a little garlic rubbed on. Just so delicious draped with a slither of jamon, am hungry just thinking about it now…

Pity Ava didn’t get in to the final product… those sneaky green vegetables!

I’ve just been listening to Conversations with Richard Fidler on ABC radio again… I love his show: his enthusiasm for his guests, the research that goes into each talk, and every single talk he has ends up being fascinating, even though I might not think it in the beginning…

Today he interviewed a clinical psychologist specialising in children & family law – a great chat with very interesting viewpoints – ie that ADHD doesn’t actually exist, that most children who are being given psychotropic drugs shouldn’t be and it is the issue of control that is the problem.

The interviewee (whose name I’m trying to find!) also gave his two most important, and wonderful, points of advice regarding good parenting:

2) Open up your heart to your children so that they can feel how amazingly awesome you think they are.

So simple, yet I feel so guilty already for being far from a great role model most of the time, and letting my learnt shouty behaviour get the better of me… but I’m trying every day to get better and break away from my destructive past… I hope that I show them how much I love them? He said it’s not just about telling them you love them (although that’s obviously important) but also your body language and how you manifest love in other ways as children are so perceptive.

I’ve just finished a brilliant book – it took me three fricken months to finish it and then had to give it back to the library but I’m so glad I pushed through as it’s given me a lot to think about:

‘When Your Kids Push Your Buttons And What You Can Do About It’ by Bonnie Harris.

In a nutshell: your kids are your teachers. Whatever buttons are getting pushed in you is what you need to deal with from your own childhood and sort out! It’s amazing that I’m only starting to realise that instead of feeling like the grown up, adult mother of two with all the answers, that I thought I would be at almost 40 –  instead I feel immature, unsure, unwise and out of control a lot of the time – and it has been through reading this book to wake me up to the fact that having children will obviously bring up submerged childhood issues that you never realised existed before you had kids… Parenting’s a minefield, I need all the help I can get!

Like Loading...
Categories: Family | Tags: 'When Your Kids Push Your Buttons And What You Can Do About It', Bonnie Harris, children, parenting, role model | Leave a comment

I went to a talk the other day at my library on ‘Nutrition for Babies & Kids’. Most of what the guest speaker said I thought was pretty obvious but there were quite a few new mums there asking about introducing formula/ weaning etc. I was shocked and dismayed to hear the speaker (supposedly a qualified nutritionist introduced by the sponsors, a local pharmacy) advocating the drinking of bottled water over tap water for kids up to the age of 5. Dangerous and misleading – apart from the expense of buying bottled water & the environmental impact, what about the plastic contamination and lack of fluoride? I’ve a mind to write to the chemist and tell them how I feel, if I only get a minute to find a piece of paper & an envelope!